When will it stop?

It’s easy to sit in an ivory tower.

We live in NYC. We are enlightened. We are cool. There is nothing we would not do for our dogs. We love animals.We treat our dogs as members of the family. For many people their dog is their soulmate.

However when it comes to raising a puppy or “training” a dog we are apparently still stuck in some kind of myth that tells us that we have to dominate, intimidate, scare the crap out of our innocent little puppies in order for them to understand what we expect of them. If we don’t do that they will, like crazy communists take over our lives and force us to submit to them. They will “take over” and maybe even force us to clean the sidewalks using tooth brushes while they laugh at us.

I experienced two examples in the last 2 weeks that made my blood boil.

The first one was in a veterinary hospital waiting room:

A woman walked in with a lively labradoodle. A puppy. She was maybe 5 months old and really, what I would consider, uneducated: all over the place. Pulling, anxious, barking, whining, jumping, wanting to play with other dogs, jumping on people. The puppy weighed about 25 lbs and was on a choke chain collar.

The woman putting on her stern voice and yelled: TSHHHH NO!! She yanked sharply  on the leash and stood up straight, posture imitating a threatening stance and a bad imitation of staring a dog down. After several of these actions did not work she harshly stepped on the leash, forced the dog onto the floor and alpha rolled the puppy.

My blood was simmering.

NO!! TSHH TSHH !!! She continued to hold the puppy on the floor. The puppy was whimpering and struggling.

She kept hissing and yelling at the dog. Finally the puppy quieted down for a second. This prompted the woman to say: “good” in the same nasty demanding tone of voice she used for her tssssscht! tssssch! and she decided to release the dog from the floor.

A half a second later: the puppy started over again..and so did the woman.

Of course at this point it took all my willpower not to run over to that woman and strangle her or at least lecture her.

Do you love this cute puppy?

Is this the way you talk to someone whom you profess to love and and have good relationship with?

Do you see that you are simply going in circles and accomplishing absolutely NOTHING?

What the woman needs to understand is that by definition punishment can only work if it diminishes the frequency of the unwanted behavior. The goal of punishment is to install such fear and aversion into the dog that he will be too scared to attempt that behavior again. Her reprimands and physical restraints, as mean as they were, were ineffective. I think she succeeded to scare or confuse the spunky little puppy but not enough to frighten her to the point where the puppy was shutting down, which is usually the goal of punitive based training. Break the puppy’s spirit!!!!

I could just hear her “trainer” tell her how she needed to establish her alpha status over the little puppy and thus she attempted to blow herself up like a a stag who was about to fight with another stag over a female…ridiculous. But most of all: INEFFECTIVE!

The scene was repeated at least 6 times while I was there…thank goodness the woman and her puppy left before I exploded with anger or started to throw up right then and there.

Then, a couple of days later: I was walking my dog Petzi on Jane Street where we saw a “trainer” work with a woman and her about 3 month old puppy. The puppy was jumping up. The “trainer” kneed the little dog and made a terrible noise. I could see the puppy recoil and tremble. However the little baby had no idea what to do instead. So he jumped again. The anger of the “trainer” was palpable. He then decided to cross the street to get the puppy farther away from the woman who was having him/her “trained”. He must have thought that the vicinity of the owner must have been noxious…or something. So then across the street he kind of tempted the puppy to jump by waving the treat around above his head and then jerked and hissed when the puppy jumped up.

I mean: What kind of lesson is that? It is horrible. Does he not realize how damaging this behavior is to the puppy? Why make a puppy fearful?

Really, it makes me horribly angry.

I think, the longer I work with dogs the more passionate I feel about this subject.

Why would any human being who professes to love dogs act like that? Do these people work with dogs because they feel it gives them a license to act out their aggressions without legal consequences?

Isn’t it high time to stop this nonsense?

Filed In Dog Training and Related News
In the article: compulsion based learning, dangers of punishment, http://rogerabrantes.wordpress.com/2011/10/03/commands-or-signals-corrections-or-punishers-praise-or-reinforcers/
0 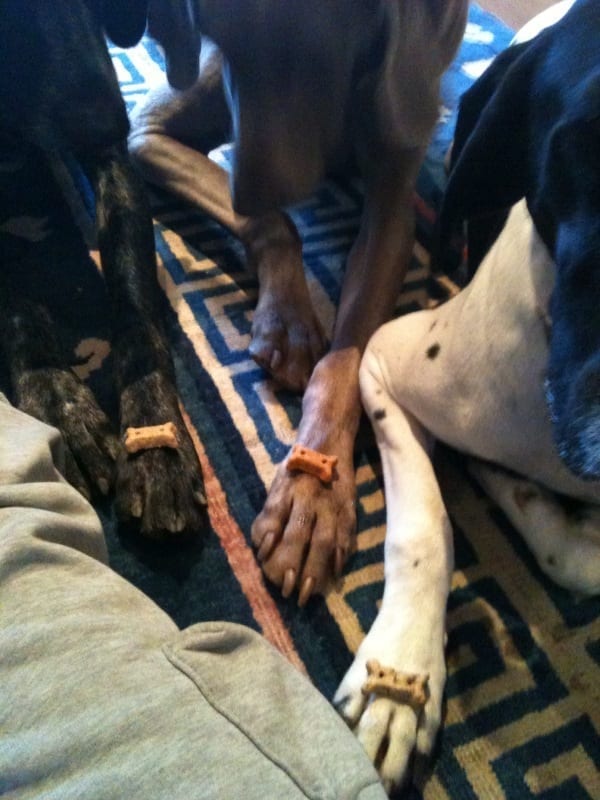