In July of 2009 I had the great pleasure of meeting a little rat terrier named Lolabelle. She had been diagnosed with a rare form of pancreatic cancer called insulinoma in January of 2009 and her prognosis was grave. In fact when I met her she was expected to succumb to her disease practically at any moment in time. 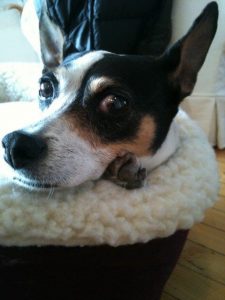 Lolabelle lives with Laurie Anderson and Lou Reed who were very concerned because they had to go out of town and felt they wanted to do something special for her in their absence.

That is when I came into the picture. I suggested engaging Lolabelle’s mind, teaching her new things to elevate her mood and alleviate her boredom. She had been surrounded by music all of her life so I proposed teaching Lola to play piano/keyboards, among other things.

I had taught my own dogs to play the piano to a limited extent ( they are too big and would break the keys in enthusiastic moments).

I have a background in music myself and my idea was that teaching dogs something that would give them feedback of sound would be more amusing than teaching them to go get the TV remote, for example.

To read about Lolabelle started to thrive and see some special videos of her playing the piano, see Lolabelle Part 2.

Elisabeth
September 22, 2022
I find different behavior cases so interesting, challenging, and gratifying when I can find a way to solve the path. Today I went to see a dog with megaesophagus. This is a malformation of the esophagus that makes keeping food down very difficult. The dogs have to be put into…
Read ArticleBlog

Elisabeth
August 18, 2010
Well, we started right away and after a few days I was able to send this video: Lola started to thrive. The process is so joyous for Lolabelle that everyone around Loli felt uplifted by her enthusiasm. Laurie and Lou were astonished at her ability to acquire new skills and…
Read ArticleBlog

Elisabeth
August 13, 2010
Mya and Elias One of the most amazing things I am discovering is not only how eagerly dogs learn but how quickly they accomplish things that seem quite counter intuitive to a dog. A prime example for this is the exercise “leave it” where I place cookies on the paws…
Read ArticleBlog

Elisabeth
August 1, 2010
Nikki and Bella were adopted together and are litter mates. I think it is very important to treat siblings as individuals. I work with each dog separately as well as working with them together.. The following pictures show Nikki and Bella outside on a 20ft leash learning how to sit/stay…
Read ArticleBlog

Elisabeth
July 7, 2010
Isis is a very smart puppy. Here she is, just like Nikki and Bella , in a sit/stay on the 20ft lead on a busy New York City sidewalk. Her greatest accomplishment is that she comes every single time when called . That allows her to go to Central Park…
Read ArticleBlog