I find different behavior cases so interesting, challenging, and gratifying when I can find a way to solve the path.

Today I went to see a dog with megaesophagus. This is a malformation of the esophagus that makes keeping food down very difficult. The dogs have to be put into an upright position in a special chair that looks like a prayer bench and need to be fed in small portions and then kept upright in that position for 30 minutes after eating.

Clearly, in terms of training, that makes it much harder to reward them with food, even little licks of food.

The human’s complaint was excessive barking, separation anxiety, and basically that the dog was “untrained” because she had spent all her financial resources in emergency rooms when the dog got aspiration pneumonia from his condition.

Even before I went to evaluate the situation, I was thinking about inventing a reward system that would teach the dog to put himself into an upright position on his own to get a little lick out of a dispenser.

Lately, it has become very apparent that fulfilling a dog’s inherent needs is a huge part of “training.” Providing the dog with calming outlets like chewing, licking, sniffing, and digging can help prevent so-called nuisance behaviors. Now clearly, in this case, this had never happened for obvious reasons.

June showed me right away that he adores licking and chewing.

When given something to lick, he was instantly so much less noise sensitive!

I was actually amazed how wonderfully he responded to being rewarded to be in his “spot” with stroking and petting and released with a tossed toy, a squeaky to inspire him to go back to his bed, and lastly, not to bark at the sound of the entrance door, of knocking and me running around the apartment like a nut head. (Whereas when I first walked in, any movement I made was met with incessant barking and the second I moved, he would bark again).

So to come back to allowing dogs to “be dogs” and provide them with the experiences they crave, allowing them to explore, satisfying their need to sniff and lick and chew can not only be used as a reward for them, it can help them to be emotionally and physically balanced and more optimistic.

June had never been given an antler or anything else satisfying to lick or chew.

By understanding what is important to your dog, you can build a repertoire of rewarding activities that are not only satisfying in themselves but will build a dog that can withstand stress better. Of course, this was a particularly challenging situation for a person who has never had a puppy before and was now dealt a puppy with health challenges.

Sometimes limitations are guides. You already know where you cannot go, but you can build on what you already know has great value to the learner. In this particular case, the human felt terrified and constricted by the dog’s inherent disabilities. But look at the opportunities: Instead of constricting the dog into a chair, upright and shoving down meatballs with pills and hoping that he keeps it down while held upright: take advantage of the ability that he CAN lick, that the nourishment can happen while he is learning, that the medication CAN be prepared in a liquid form (why oh why did the vet not suggest that?)

This sweet puppy will learn not to bark (which is what got him attention in the first place), and he can become more self-confident by choosing learned and rewarded/reinforced behaviors that require him to be calm.

Elisabeth
August 13, 2016
Zeldi just had a great play session with an adolescent border terrier who lives a block away from us. They had a very animated game, their playing styles were matched really well. Both the handler of the border and I were able to call our dogs back to us and…
Read ArticleBlog 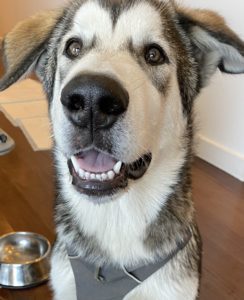 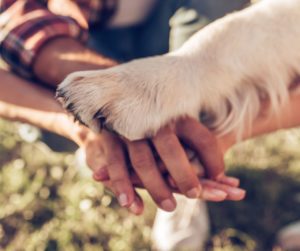