He was sincere and funny and he was outspoken.

He was totally committed to his loved ones. He adored Laurie. I am sure he still adores Laurie..his love for her was so strong. Love like that does not die.

He wanted the best for Will. He would chastise himself for not having done the right thing by Will.

He would ask me: I was wrong! Do you think Will still loves me?

He thought Will was an angel and incredibly beautiful.

I am grateful to know him, to have been his friend. I knew he trusted me and that was the greatest compliment.

We went through a lot together, first with Lolabelle and then with the challenges of raising a little border terrier puppy.

Lou and Laurie you changed my life forever.

This little paragraph from soundcheck is the Lou I knew:

Two things I will always remember from our conversation in 2006: First, all of the photos were of New York—the city, not the people. “There is one figure in the back of an alley,” he admitted. “You can probably guess who that is.” (It was Laurie.) The other is that our building security gave him a hard time because he tried to bring his dog. In a little carrying bag. He was quite miffed that he wasn’t allowed to bring the dog in, and heaven help me, I couldn’t help thinking, “ A dog in a carrying bag??? You’re LOU REED! You should have a snarling Rottweiler or a Rhodesian ridgeback or some other super scary dog, not some little carry-on thing!” Of course I never said this aloud. I’m not a complete idiot.

First Google+ hangout! Mark your calendar for the next… 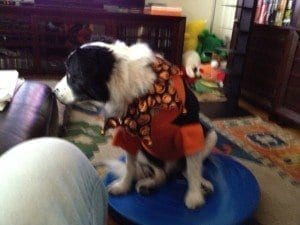 What a cute surprise