Sadie is approximately one year old. She was rescued about a month ago from what must have been abominable circumstances. She was kept in a crate in a dark basement,  just let out of the crate to eliminate. She must have had minimal human contact. She had no knowledge of life and was afraid of every sound and every object.  Even the happiest sounds to a normal puppy, like the sound of a rustling food bag or the sound of kibble dropping into a bowl, caused her to panic. Luckily Sadie was rescued by a client. When I first met Sadie she only knew the crate. That was her safe haven. The first day I started working with her it took me hours to get her to make eye contact with me.

Fortunately Sadie quickly discovered that roast beef and turkey were pretty tasty!  Working in tiny increments, encouraging her with a soft click sound and roast beef  I was able to gradually help her exit the crate and “conquer” her surroundings. Inch by inch, object by object. I always allowed her to run back into her crate for safety. I wanted everything to be a voluntary effort on her part so that she could actually learn to overcome her fears. For me it was wonderful to see how brave she was and how hard she tried.  What a great lesson for me. 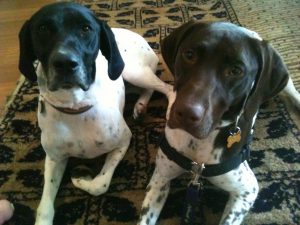 Here is an example of how difficult it was for her to approach a new object. I had originally wanted to use my eye glasses case to do some sound desensitization work by using the rather low and relatively harmless sound of opening and closing the case.  But realized that she was so afraid of the case itself that I had to go back a step.

Here is an example of how difficult this exercise was for her:

Sadie has learned a lot. She is no longer afraid of objects.

This picture shows her with cookies on her paws. 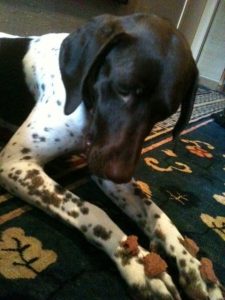 Open House at The Stone